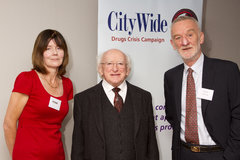 CityWide Drugs Crisis Campaign is a national network of community activists and community organisations that are involved in responding to Ireland's drugs crisis. Set up in 1995 by the Inner City Organisations Network (ICON), to bring together Dublin communities that were struggling with the heroin crisis, we now work nationally linking communities across the country dealing with a range of substance issues.

We work to promote and support a community development approach to the drugs problem - this means involving the people who are most affected by the problem in dealing with the problem - drug users, their families and communities.