A Quiet Revolution - Decriminalisation Across the Globe 2016 Release 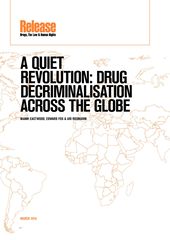 This is the second edition of ‘A Quiet Revolution: Drug Decriminalisation Across the Globe’. The first edition was released in July 2012 and has since been cited by a wide range of organisations and agencies, including: the World Health Organisation, the Office of the United Nations High Commissioner for Human Rights, and the Global Commission on Drug Policy. This edition builds on the 2012 publication, providing updates on the jurisdictions originally covered and highlighting a number of new countries that have adopted a non-criminal justice response to the possession of drugs for personal use