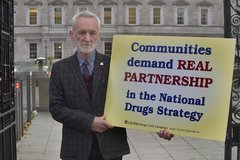 All of the country’s former Ministers of State with responsibility for the National Drugs Strategy have united together to call on the Government to restore confidence in the National Drugs Strategy in particular because the partnership approach which underpins the Strategy is in danger of collapse. The statement by the former Ministers was made at an event organised by Citywide.