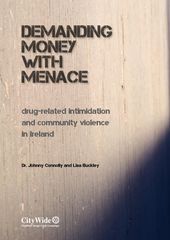 New research shows that over two-thirds of people experiencing drug-related intimidation do not report incidents to the Gardaí mainly for fear of reprisal. The research which is set out in the report, Demanding Money with Menace: drug-related intimidation and community violence in Ireland— carried out jointly by CityWide Drugs Crisis Campaign and criminologist, Dr Johnny Connolly — also shows that almost half of the incidents of intimidation involved physical violence and almost one-third involved damage to homes or property.

Demanding Money with Menace: drug-related intimidation and community violence in Ireland was launched this morning at a media briefing in Dublin’s Liberty Hall.   You can download the report here

Three-quarters of intimidation incidents are directed at drug-users or the person in debt, while mothers of users are the target for one-third of incidents;