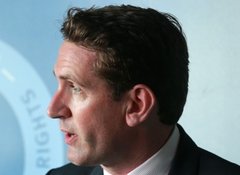 Citywide warmly welcomes the appointment of Minister Aodhán Ó Ríordáin as Minister of the State at the Department of Health with special responsibility for the National Drugs Strategy. Speaking today, Joan Byrne of Citywide said “Minister O’ Ríordáin has in the past shown his support for communities struggling to deal with drug related problems and we believe that he will provide the leadership badly needed to drive the response to the drugs crisis”.

Citywide has been actively campaigning for the  appointment of a Junior Minister since the Cabinet reshuffle in July 2014 whereby responsibility for drugs was subsumed into the portfolio of the Minister for Health. Ms Byrne further added “the new Minister has a big job to contend with  – 633 drug-related deaths in 2012,  a drugs trade in Ireland estimated to be worth 600 million, a total of 64 actions that need to be implemented across 19 different government departments and agencies in the current Drugs Strategy and a 37% cut in budgets to services on the ground in communities in the last 6 years. Citywide is fully committed to working with the Minister to support him in delivering the national Drugs Strategy and we will be requesting  an immediate meeting with the new Minister in order to brief him on the current situation of communities most affected by drug misuse”.