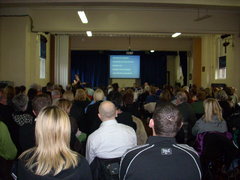 Over 150 activists and community reps met in St Andrews Resource Centre in Pearse St, to agree a campaign of action to highlight the damage that is being done by the dismantling of the partnership process in the National Drugs Strategy.

The three national representatives outlined developments on the 6 key demands since the last meeting on 17th September:

1. A Minister for the Drugs Strategy at the Cabinet Table (Super Junior)

This was put in place in 1996 as an indication of the priority given by government to the drugs issue at the time. The Government has indicated that it no longer sees this level of priority as necessary.

2. Immediate mandate to LDTF &RDTF's to develop new plans to meet local needs. & Statutory agencies to be instructed to engage

The budget for 2009 will effectively cut back Local Drug Task Force (LDTF) budgets by around 10% and Regional Drug Task Forces (RDTF) by around 20% (up to 35% cut in amount of agreed upper limit for some RDTFs). It is Minister of State Curran's view that the cuts will not have any significant impact on projects and services on the ground. Community organisations and projects are clear that this level of cutback cannot be implemented without a negative impact on existing drug services on the ground in local communities.

The Young People Facilities and Services Fund (YPFSF) has been moved from the Drugs Strategy Unit in DCRGA to the Office of the Minister for Children (OMC). The YPFSF has been a hugely significant part of the drugs prevention pillar since it was established as an outcome of the 2nd Rabbitte report in 1997 and has been a major source of funding for drugs prevention. The transfer to the OMC threatens a serious decrease in resources for crucial drugs prevention work with young people. It is essential that the YPFSF keeps its drugs focus, but several months after the move was announced, there is still no clarity or commitment on this from the government. Wherever the YSFSF is located, it must continue to operate as a core part of the Drugs Strategy. The Drugs Strategy cannot afford to lose this significant resource for local communities.

4. Resources to be made available to implement the Rehabilitation Strategy

The National Drugs Rehabilitation Implementation Committee has been set up and a total budget of 750,000 from the Drugs Strategy Unit has been allocated to rehabilitation projects across the 14 Local and 10 Regional Drug Task Forces. However, the implementation of the government's drugs rehabilitation strategy will require significant levels of investment if it is to be effective and there is no additional funding available for rehabilitation in 2009.

The Dept. of Health Working Group on Alcohol (set up as a result of an action in the existing National Drugs Strategy) did not make any recommendation on a joint strategy for alcohol and drugs, because one sector alone i.e. the drinks industry, wouldn't agree with it. All other sectors agreed with the need to develop a joint strategy on alcohol and drugs and the public consultations on the new NDS strongly supported this view.

The new National Drugs Strategy must reflect the views that came from the consultation that there should be a joint alcohol and drugs strategy with adequate resources to implement it.

6. Community Policing Fora to be established without delays

The revised guidelines for Joint Policing Committees have been completed and put into legislation by the Dept. of Justice, but the guidelines for the local Community Policing Fora (CPF) were not included as they should have been. This is delaying yet again the setting up of CPFs in Task Force areas. The guidelines for the Community Policing Fora must be formally approved and adopted and published in a statutory instrument by the Dept. of Justice. This is a crucial step in ensuring the future of CPFs and the continuing delay is causing serious concern to those who are actively involved at local level in the CPFs. Along with the publication of the statutory instrument, adequate funding must be secured to prioritise the setting up of CPFs in the 14 LDTF areas, as outlined in the NDS 2001-2008.

The National Rep's proposed a six month campaign with two important dates: March as it will be the launch of the new national drug strategy, and June as the local/European elections will be taken place. This campaign was unanimously agreed by the meeting.